so at the start of the week the 2 older girls were still at Kentwell. unfortunately a rainy day for them. They came back happy, bubbly and exhausted! they clearly had a fab time. And thankyou to izzy for lending her caravan for them, as they were v happy with that.
Tuesday SB had her first silver arts award meeting. they need to do a challenge, and apparently hers will be to take grade 1 oboe, this term!!! considering we are starting october, and the exam can be from a months time, and she has never played the instrument before, i am not convinced this is a good idea! also, I think the oboe itself might need a fix. argh!!! I'm not sure how she is going to fit all these things in!
I had pulled a 24 hour work shift on tuesday, so had thought i might spend wednesday snoozing, but that didnt happen! instead i got the girls all chivvyed in home ed, and they all did a good day of work. we also played a game, and BB and SPD did some more sliding on the slip and slide :) . BB finished making a halfpipe for her fingerskateboard. NannyF also came round after her hospital appointment. so quite a lovely day :) 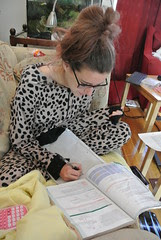 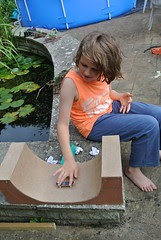 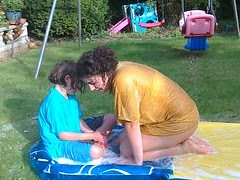 thurs and fri were more home ed days, making sure that SpD is getting to grips with English well. She has nearly finished her tudor history journal, and the dancers art journal is coming along. She isnt so keen on the IGCSE english as a second language, as this is a bit harder for her. however, dh and i do some with her to keep going!
At the weekend we went off to telford to do some victorian living history. I talked a lot about industrial revolution, and ironbridge being considered a 'birthplace' . We had a bit of trouble with our hotel - days inn - and really wouldnt recommend it! However, finally in a room where all the beds at least worked even if the sheets werent spotless!
Our first day was spent at blist hill victorian town. we all really enjoyed it. lots of discussion [ok, sometimes i was monologuing ;) ] and seeing what was there, and how it was done. treated all the girls to old fashioned sweets near the beginning and ice cream at the end [ i think i have sussed this parenting lark!] bb fascinated by wood carver, who told her there was lots of money in it, so she should keep going :) 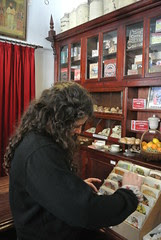 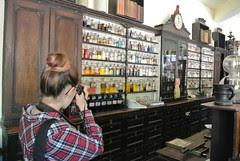 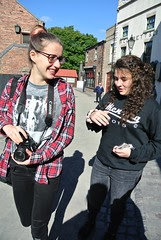 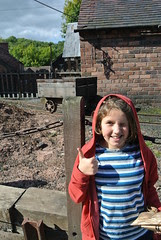 we went shopping afterwards and bought bb a wedding suit and then went for a meal at nando's. this wasnt straightforwards, as bb had been expecting to go home. however, we did eat a meal out so pushing the boundaries!
sunday and we gave Spd the choice of the acton scott farm, or tar tunnel and china museum. she chose the latter. we liked the tar tunnel. we had tried to go there once before and been foiled [waves at the old manor borns!], so it was nice to get to go down the whole length. there was still tar in it! I do like photos of the kids with hard hats! 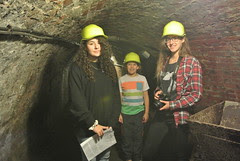 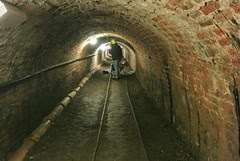 we had a pleasant walk back along the canal, though noticed there has been an invasion by himalayan balsam 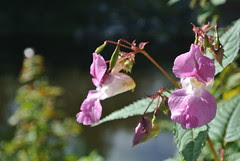 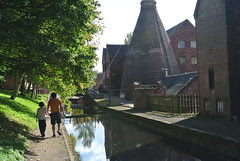 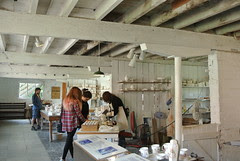 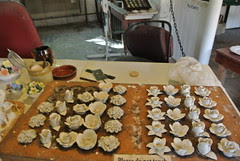 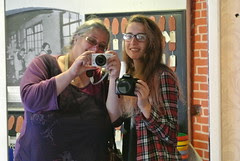 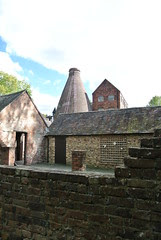 we walked into ironbridge - it was very hot! had icecreams, posed on the bridge and then walked on to the museum. the big girls were all museumed out, but bb had her second wind and read and talked about everything :) . she was pleased to find the boat 'spry' in there as a model, as we had seen it at blist hill and it had really captured her fancy them :) . what a great weekend break. i am so lucky with my family to be able to share the sunlight and time with them. 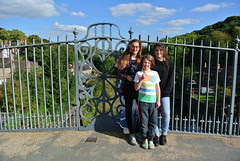 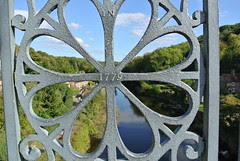 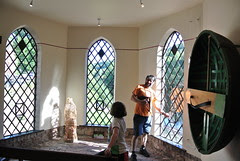 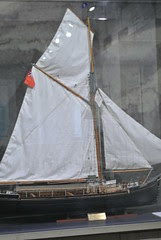 Posted by HelenHaricot at 6:04 AM